Hint
Doctor Herbert is a character in Gleaner Heights.

He works at the Hospital on the main row of town, next to the Police Station and Penny's Diner.

Doctor Herbert is an older guy with wild white hair and facial hair, and wears glasses. He wears a brown suit.

When exiting the Blacksmith's at night (With Lazarus and Ken inside), Kain is startled by the character and runs off, dropping a vial in the process. If the player shows this to Kain, he denies ever having seen it and Ken and Lazarus wonder what it could have contained.

The vial can be shown to the doctor who confirms that it contains poison. After this, the player can show the vial to Ken in order to trigger the rest of the event.

Ken, the player, and Lazarus confront Kain and he confesses. He says that he had to expand, as Joshua was looking to get a different carpenter from the city. Though Ken wants to throw him in jail, they instead make a deal where Ken takes over the carpenter as well.

After Kain leaves, they thank the player. They recieve two octotinium and the vial.

NOTE: You can get a different outcome of the vial event if you show it to first to the Doctor, and then Kain. Kain will offer you a couple thousand gold to never mention this event again. 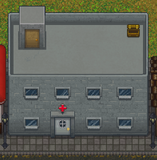 Add a photo to this gallery

Retrieved from "https://gleaner-heights.fandom.com/wiki/Doctor?oldid=4655"
Community content is available under CC-BY-SA unless otherwise noted.